Continuing remarks feature this time on the original LP notes as cited by Fred “Kermit” Dellar in November 1995 in the CD insert.  The notes have just referred to the three brass men in the band, one of whom is Henry Lowther on trumpet; all three are said to have been brass men in John Mayall’s Bluesbreakers.

The name Henry Lowther in connection with John Mayall has been familiar to me since not long after I got my first record player in January 1970, by dint of my fervent acquisition of samplers, these being in those days an inexpensive way of collecting some brilliant LPs.  The 1970 Decca “Deram” sampler was called “Wowie Zowie”: 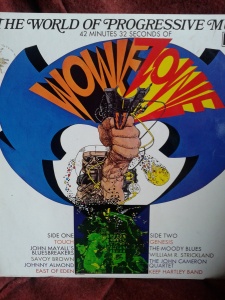 This sampler gave some details of the tracks on the back cover: 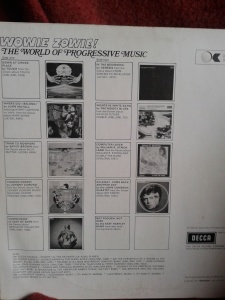 The second one down on the left gives details of a truly wonderful slow English blues song called “Where Did I Belong?” from John Mayall’s 1968 LP ” Bare Wires”:

As will be observed, however, it is the haunting violin on the track that Henry Lowther is specifically lauded on the sampler, and for very good reason too, rather than any brass instrument.

Next time, we shall have a look at the third of the three Frog brass guys, Dick Heckstall-Smith.