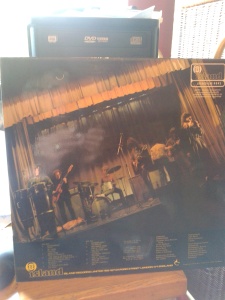 As far as I can remember, this is the only Island LP of the era where the “ILPS” box appeared on the back.

Anyway, clearly the main feature here is the photo of the band performing.  From the left, we have Ian Matthews on bongos and wearing sunglasses; Ashley Hutchings on bass with the dog (Bradford?) at his feet, somnolent; Martin Lamble on drums; Richard Thompson with head bowed on lead guitar, Harvey the Roadie with his back to us, twiddling with the amps; Simon Nicol on rhythm guitar; and Sandy Denny.

All six members of the band were at the shoot for the photo which adorns the front cover of “You Can All Join In”, though only five are visible; Richard Thompson was one of the three who got cut off the picture (as used) at the left edge. 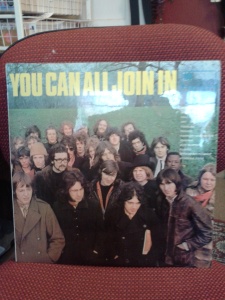 Sandy Denny is of course the only female person there.  Ashley Hutchings is in the top right corner of the group, on the back row, his face shown only to the tip of his nose.  Ian Matthews is to the left of Steve Winwood’s woolly hat, right next to Richard Thompson in fact, at the left edge of the photo.   Simon Nicol is the tall chap right in the middle of the group, with long hair parted in the middle, and Martin Lamble is peering over his shoulder with a finger to his lips.  He would be dead within six months of this photo being taken, as would also Sandy Denny be within ten years of that date.