Today we continue with “Melanie Blue”‘s notes in the CD insert:

“Nirvana’s next break came unexpectedly.  John Bryan was directing a feature film starring four girls (Judy Huxtable, Marilyn Pickard, Esther Anderson and Kathy Simmonds) who were models plucked from the pages of Vogue to appear in a typical summer-of-love romp entitled “The Touchables”. 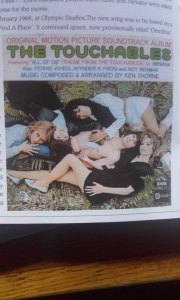 What the director wanted was Stevie Winwood to write something along the lines of his music for “Here We Go Round The Mulberry Bush”.  Stevie was too busy – but fortunately “Tiny Goddess” was playing in the Island office and the film people asked “What’s that?”.  Chris Blackwell played them more and Nirvana were asked to write a title theme for the movie.”