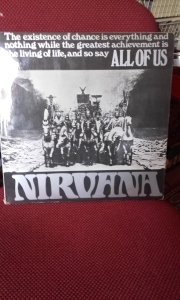 This will be the last post on Nirvana for the foreseeable future, and deals with the four bonus tracks on the expanded CD version of this remarkable album.

There being 12 tracks on the LP, the first bonus track on the expanded CD is Track 13.  This is “Flashbulb”, which was the “B” side of “Rainbow Chaser”.  Actually, this is a very good song.  It is a slightly frantic, cartoon chase, rock’n’roll thing, but most attractive in its own way.

Track 14 is “Oh! What A Performance”, which was the “A” side of Island single WIP 6057.  This was the song originally called “Oscar”, and referred to at some length in “Melanie Blue”‘s notes in the expanded CD insert [see above].  It is a Beatlesque romp, very appealing indeed, with a slowed down refrain; the sort of thing you would expect to find on “Magical Mystery Tour”.

Track 15 is “Darling Darlane”, which was the “B” side of “Oh! What A Performance”.  This is a souped up early 1960s style ballad, with an up tempo arrangement and absolutely great harmonies.  This is one which I can personally guarantee grows on you with every successive hearing, and as such qualifies as an excellent pop song.

The final bonus track, Track 16, was the “B” side of Island single WIP 6038, but I am not sure what that was.  It is an instrumental called “C Side of Ocho Rios”, and is a soft rumba based thing.  It only lasts 2.13 minutes, but is cleverly arranged, so although it is inevitably a bit on the funky side, it is actually a very good track.

Next time, we come to the Spencer Davis Group.