Buying the LPs sampled on Nice Enough to Eat.

This is one of my favourite albums; I just love everything about it, and it has been referred to several times in earlier posts.  Indeed, I even uploaded a picture of the cover, if my memory serves me correctly.

I bought the LP second hand, and it has the lovely pink label with the white “i”. 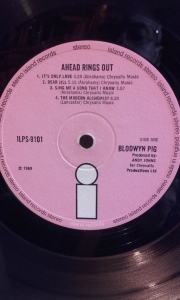 This was, of course, the UK version, so the front cover has a deep lurid pink background, the only writing on it being, in large yellow block capitals, “BLODWYN PIG” at the top, and “AHEAD RINGS OUT” at the bottom.  Grandly occupying the middle section is a picture which has always captivated and entranced me like no other.  It is a pig’s head, with a ring through its nose; but it is wearing headphones and sunglasses, and is smoking a joint.  Forget the Mona Lisa; this image is just wonderful, and for me the best picture in the world.

The back cover is the same lurid pink background, but much more sparsely populated.  In the middle is a pig’s tail, and there is nothing else except some small marginal items.  In the tip left corner is the word “Chrysalis”, with the buttefly logo.  At the top right corner, but not in the usual curved oval box, appears: “STEREO ILPS 9101”.  At the bottom in the middle is the word “island” with the “oval rings” logo, and the Basing Street address. 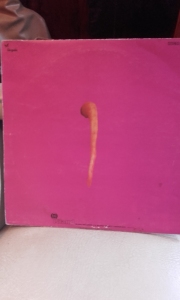 From the very first time I saw this album, on the back of “Nice Enough to Eat”, the title just about made sense.  A head, well there it was for all to see; Rings out, could be a sort of general command to the head to remove the ring from its nose.