The back cover of the LP is a wonder to behold.  In essence, it is a surreal maritime scene in immense detail, with credits at the bottom, below the water line. 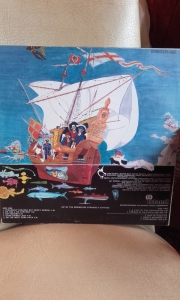 The major feature of the picture is a galleon type ship, called “The Serene Boy”, heading to the viewer’s right.  Three smiling behatted men are prominent towards the bow, immediately above them a banner bearing the legend “1st CLASS I.O.U”.

It is of course the starboard helm of the ship which is visible, below the men two cannon, one pointing forward and the other starboard.  Behind them a captain figure gazes aft through binoculars, and below him Rupert Bear looks out starboard.  Behind him is a character standing upright and facing the viewer full on, and wearing the uniform of an old-fashioned police superintendent.

Underneath Rupert Bear, in a cut out section beneath the water line, a knight is visible riding a unicorn, wearing a yellow tabard emblazoned with large red capital “M”.

To the rear a third cannon has just fired, discharging a figure in blue tights and a red cloak, whose head is just off picture.

At the back of the ship is an anchor, and above it a large red aft sail with green edges and containing a green cross.

Forward of the sea captain and above the three smiling men is a line of four shields, each bearing St George’s cross in red.  Above these are the mast and large white billowing mainsails.  Atop the forward crows nest is a large white pennant, billowing out to port, and again bearing St George’s cross in red.  Atop the aft crows nest is a small red flag bearing a picture of the right profile of a man’s face with an eyepatch.  To the left of this is another betighted figure flying off into the sky, again with his head off picture.

More of this astonishing vista next time.