(Buying the albums sampled on “Picnic”).

“Alchemy” is one of the most fascinating LPs to have emerged from the “underground” scene in that vintage year, 1969.

The gatefold sleeve is a New Age masterpiece.  The front is in black, gold and white, with the EMI Harvest logo at the top centre.  At the 4 corners are tangled string-like white designs, and at the bottom centre, in barely decipherable intricate capital letters, in black on white, is the title “Alchemy”. 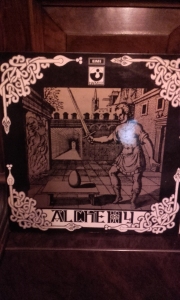 However, a large ornate picture fills the centre of the front cover, depicting, I believe, the Philosopher and his Stone.  Centre stage is a man dressed in the traditional way Ancient Greeks are portrayed.  In his right hand he holds aloft a large sword, as if to strike the object below it, which looks like a huge egg standing on one end on a small low table.  This action takes place in a paved courtyard, to the left of which burns a great fire up a chimney,  At the far end of the courtyard a very long tunnel opens, the opening of it being square.  This accentuates the “geometry” of the scene.  The distant far end of the tunnel, however, ends in an arched exit.  Over the top of the far wall, a tree is visible to the left, and to the right are some buildings, one of which seems to be a church steeple.

The whole effect of the front cover is very dramatic.