(Buying the albums sampled on “Picnic”).

The back of the gatefold sleeve is in the same black, white and gold colours, and has the same “twisted string” corners as the front cover.  However, most of the reverse is white space.  At the top right, above the twisted string, appear these characters: “STEREO SHVL 756” 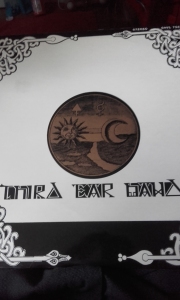 At the bottom of the white space, in the same almost unreadable ornate capital letters as are used for the title on the front, is the band’s name.  Centrally, just above these words, and so just above the word “EAR”`, is a circle about 4 inches in diameter.  This has a black outer rim and a gold inner rim.  Inside the circle, in its lower half, is a white path going up a hillside.  In the upper half are 4 astrological symbols.  The larger two of these are the personified sun and crescent moon, joined by a white bar.  Above these are two smaller symbols roughly resembling those conventionally used to depict respectively male and female.  All in all, a splendid reverse to match the dramatic front.

The inside of the gatefold sleeve is in black and white.  Two thirds of the space is filled by a “double picture” of the three members of band, Glen Sweeney, Paul Minns and Richard Coff, standing in ornate terraced alcoves.  The left half is a mirror image of the right, or vice versa, so each is shown twice. 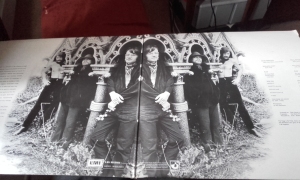 In the white space on either side of the double picture are words in black.  More of these next time, starting with those on the right.