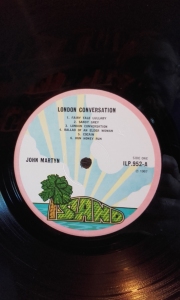 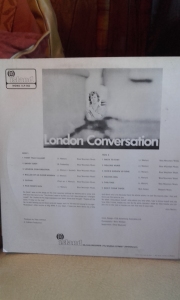 I also have a CD version, where the CD itself faithfully reproduces the pink label:

The CD has a bonus track “She Moved Through The Fair”.

Common to both the LP and the CD are his notes for the album, from which we learn that he was just 18 when he recorded it in 1967.

“So there I was on this barge on the river wearing nothing but denims and a smile, and this blue man says to me, “You know I used to be like you, but I saw sense and changed myself”.  So I looked at his sage expression and black shoes and thought “Thanks all the same, I’ll stay on the river”.

“So I’m still floating up and down and still happy, and I’m 18 now and young for my age!  Nowadays I often revolve at 33 1/3 RPM.  If you listen, I hope you learn about me a little and about you a lot because that’s the whole scene.  I’m just like anyone &se [sic], I feel and think just the same as you.

The album is sheer, unadulterated delight from beginning to end.  Two songs on it have always had special significance for me.  The last track on the LP was his version of Dylan’s “Don’t Think Twice, It’s Alright”; I have always associated this with Girlfriend 26, my wife having been Girlfriend 27.

Track 8 on the CD is “Rolling Home”.  Term time 1974 to 1977 I was in Oxford and Girlfriend 27 was in Sheffield, my home town.  I used to get the train back to see her at weekends, and this song would be playing non-stop in my head as I stood all the way on those journeys.