Before embarking on the next magnum opus, I think I need to say a bit about the history of my love of music, which as far as I know, goes back to my early infancy.  The first record I ever acquired, and one which I still have and love to listen to, is a 1959 single called “The Little Drummer Boy” by the Harry Simeone Chorale, a wholly unaccompanied male voice quire. 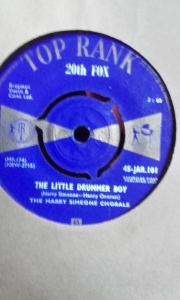 This was purchased for me by my paternal grandfather, who was passionate about music, and noticed the ecstasy on my face (I was 3 years old at the time) when I heard this song on the radio.

I was thus very fortunate indeed to change from a child to a teenager during the course of the entire 1960s.  There has never been a better time for pop music, and it all sounded brilliant to me on the Light Programme on BBC Radio (now Radio 2), right from hearing “Love Me Do” by the Beatles in the autumn term of 1962.

I compile playlists for my iPod and for MP3 CDs, and it took me just one day to make one called ” ’60s Euphoria” to fill an MP3 CD (about 12 hours of music).  It took me four years to do the same for one called “Non-’60s Euphoria”.

Even now, subject only to singing Christian songs, nothing gives me more joy than listening to the best ’60s top 40 hits.

So, by the time it got to the summer of 1969, in common with all my schoolchums, the thing we all coveted was the album “Abbey Road” by the Beatles, which was the last one they recorded and had just been released.

By the autumn term, however, when I was still 3 months away from reaching my 14th birthday, the whole music scene had suddenly changed; not least, Woodstock had happened, though I was only dimly aware of it at the time, and Jethro Tull had performed “Living In The Past” on “Top Of The Pops.  The Island sampler “Nice Enough To Eat” had found its way into the hands of those who did paper rounds, and every day I learned of new bands like Led Zeppelin, Tyrannosaurus Rex, Pink Floyd, Ten Years After, Grateful Dead, the recently disbanded Cream, Jimi Hendrix Experience, Quicksilver Messenger Service, Grand Funk Railroad, Stone The Crows, the Mothers of Invention, Captain Beefheart, Edgar Broughton Band, Third Ear Band, Deep Purple, Incredible String Band and Pentangle, to name but a few.  At that time it was not easy to access music; there was one guy at school who had 20 LPs, and we were all in awe of him.

While all this was happening, Pink Floyd had lost their main man and replaced him with some chap, Sandy Denny and Ashley Hutchings were quitting Fairport Convention to form Fotheringay and Steeleye Span respectively, and “Goodbye Cream” had been released.  By the time 1970 started, it had already got very confusing indeed.  Fortunately, I had this school chum with the hip elder brother, who was able to give me most helpful guidance through these rapidly changing times, though even that left me guessing occasionally.

It is from that perspective that I have to embark on the Pink Floyd/Incredible String Band project which starts in the next post.