Although the group started recording its first LP on 21 February 1967, the album was not actually released until after a second single had been let loose on an unsuspecting public.  This was a song originally titled “Games For May” as a handle for an event of that name, held at the Queen Elizabeth Hall on the London South Bank on 12 May 1967.  That year has gone down in history as featuring the Summer of Love.  For me, the August of that year contained the most miserable 10 days of my life, at a scout camp on the Atlantic coast of the Isle of  Arran.

Anyway, the song was retitled “See Emily Play” and released as a single on 16 June 1967 and reached No. 6 in the charts; the band had a Top Ten Hit!  I can actually remember hearing it on the radio, but to my ears then it was just another catchy pop song; I was 11 and had just left Junior School, and was about 4 weeks away from starting at the Grammar School.  Those 4 weeks of course included Arran.

The Hit meant appearances on Top Of The Pops, and although Syd Barrett was good on the first such appearance, but by the third week he refused to attend at all.  The problems he was causing were starting to get serious.

Many years later I got a second hand copy of the single, the B-side being “Scarecrow”: 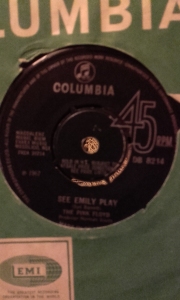 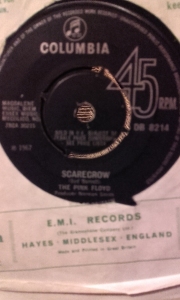 It is certainly one of the very finest pop songs of 1967.