We come at last to the astonishing music on this first, eponymous LP.  As I said in an earlier post, this one is unique in having cover notes for each track.  They were written by Mike Heron.  This being so, my comments on each track must commence with what he said about it.

Track 1 on Side 1 is “Maybe Someday” which is a Mike Heron composition on which he sings lead vocal.  He says:

“Don’t worry, she’ll come along.  Intelligent, beautiful, understanding – you’ll probably be dead by then, but she’ll arrive, and if she pays any attention to this track she’ll be Bulgarian, Indian, Scottish and schizoid.”

The refrain is a frantic thing which opens the song and is sung by Mike and Robin.  The verses are more restrained, melodic, and achingly beautiful, sung by Mike alone.  It is a fantastic opening to the record.

Track 2 is “October Song”, believed to be the first song Robin Williamson ever wrote.

“Most good songs are a reflection of the writer, upon some aspect of life, but sometimes a songwriter will attempt to throw his whole personality towards the entire area of life, and reflect his outlook fully.

“It seems to me that such an attempt has been made by Robin in this song, and the result is so beautiful that I can only ask you to listen to it with a mind as open as the one that wrote it.”

I can’t really add to that, save that confirm that it is a super song, breathtakingly wistful, and one that is a Robin Williamson solo, featuring just him on guitar and vocal.  Many ISB tracks take this format. 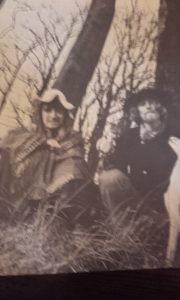