It will be recalled from an earlier post that even as early as the Top Of The Pops “See Emily Play” appearances, Syd Barret was proving to be a bit of a problem.

It all goes back to the Cambridge days.  A chap called David Gilmour had stayed there when Roger and Syd had left for London.  David was in a group called Jokers Wild, and later another one called Bullitt. This was in 1966, and the band took up residence in France, changing their name to Flowers as 1967 dawned.  Throughout, however, David stayed in touch with his old mates as they became Pink Floyd.  He heard “Piper…” and was sick with jealously.  In September 1967 he got fed up with France and moved back to England.  It was a rough voyage, and he ended up taking a job as a van driver in London, hanging around the Kings Road clubs in the evenings, hoping to get back into the music business.

Then, on 6 December 1967, Nick Mason approached him during a Pink Floyd concert at the Royal College of Art, asking him whether he would like to join the band, should such an opportunity arise.  Nothing came of it then, but between Christmas and New Year an offer came to him by a circuitous method, and he accepted.

It seems that the group had toyed with the idea of getting Jeff Beck in, but David was the devil they knew.

So Pink Floyd was, albeit briefly, a five man outfit: 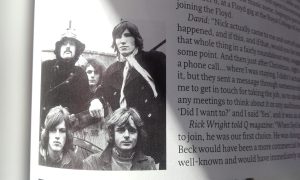