The second Pink Floyd LP was “A Saucerful Of Secrets”, and this has to be one of the oddest albums ever released.  This is because the group that recorded it did not exist in any definite form, as is evidenced from the packaging.  There are no details at all of the members of the band, and no discernible photographs thereof, although there is a tiny cameo of 4 people in a sort of wine glass on the front cover: 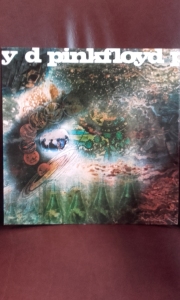 This has always seemed bizarre to me, and as I was growing up I rationalised it as being a group of three and two halves chaps; Syd Barrett had not quite left and Dave Gilmour had not quite joined.  In fact, it turns out to have been a bit more complicated than that.

More of this next time.