The band had been involved with several film projects during its short existence, and in January 1969 [when I was just starting the second term of my second year at secondary school], they were approached by Barbet Schroeder, who offered them £600 each to do the music for a film.  His idea was that this was not to be any sort of soundtrack; rather, the characters in the film would be shown actually listening to each of the tracks.  At the end of the month at Pye studios the band worked flat out and completed the required recordings in just 8 days, Roger writing the lyrics for music put together by the other three.

The tracks were collected onto an LP the full title of which is “Soundtrack From The Film More”, and is unusual for a Pink Floyd album, being a set of 13 short pieces.  The only other such is their other soundtrack LP, from a film called by a French name that translates as “The Valley”, but that has a “proper” title, “Obscured By Clouds”.  We shall come to that in due course.

Meanwhile, this is the front cover of “More”, as the album is usually referred to as: 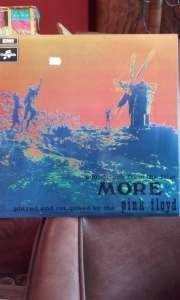