The first two tracks on Side 1 create the most startling contrast to be found on any Pink Floyd LP, and indeed I cannot think of any more such on any album at all.

Track 1 is a typical dreamy thing called “Cirrus Minor”, and is a Roger Waters composition.  It does indeed describe a trip to Cirrus Minor, even though it would still be a few months before men even first set foot on the moon.

Track 2 is another Roger Waters song called “The Nile Song”.  This is unique in the entire Pink Floyd catalogue as being the band’s only ever genuinely heavy metal number.  To say that it comes as a shock when you first hear it is putting it ridiculously mildly.  It is a very good heavy metal song; it’s just not what you would ever expect from Pink Floyd.  I can only think that the contrast effect was deliberate.

Track 3 is yet another Waters thing, and marks a welcome reversion to norm.  It is titled “Crying Song”, and it is a most soft and gentle piece, very pleasant on the ear, and extremely restful.

This is the back cover of the LP: 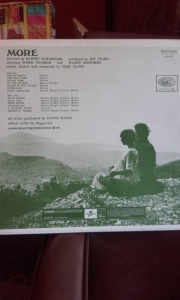