This LP has always seemed to me to be the “darkest” of all the ISB albums, but this may be just a subconscious effect of the title.  However, there is also a bit of a sense of ancient foreboding in the front cover: 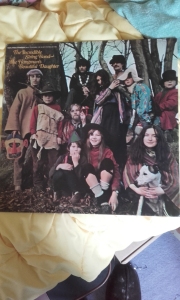 This is a motley crew.  To the left stands Mike holding a grotesque mask.  A child separates him from Robin, who is seated holding a jester’s rattle.  To the right of the picture is Licorice holding a dog.  In the middle at the back, between two men, is another woman who may well be Rose, Mike’s girlfriend who became a formal member of the band along with Licorice a few months later.  One of the men could be a chap called Malcolm LeMaistre, who joined the band in 1971.  The whole tableau is set against the bleak background of a forest in winter.  All are dressed in medieval clothes, even the hapless kids.

The music, however, though mainly a bit serious in delivery, is really not very dark at all.