As noted in the last post, this was the first Pink Floyd album I ever heard of, in the late autumn of 1969, when I had just started my third year at the grammar school, except that it had that year become comprehensive, and, for the first time in its history, co-educational.  I always knew it comprised two LPs, a live one and a studio one, and that the first track was stunning.

The front cover was intriguing: 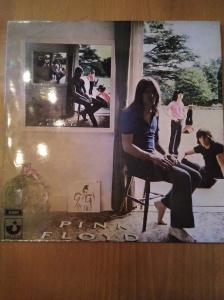 It shows the four members of the band in a scene by an internal doorway leading directly into a garden.  However, in the top left quarter of the tableau is a mirror, in which we see the same scene repeatably but with the chaps rearranged each time in ever decreasing size.  On the floor are white capital letter blocks neatly spelling out the group’s name, to the left of which is the distinctive EMI Harvest label logo.  Magic stuff, particularly for a thirteen year old schoolboy.  I turned fourteen a couple of weeks before the end of the 1960s.