Side 2 of the LP opens with a Mike Heron composition called “Mercy I Cry City”, on which he takes the lead vocals, with Robin adding just bits here and there.  It is a fairly frantic lament about city life, lasting just 2.49 minutes, but it is an excellent ditty none the less.  I have always found this one to be very moving, as at one point the singer describes himself as a “sin-drenched Christian”, which is exactly what I am.

Track 2 is a weird Williamson chanson titled “Waltz of the New Moon”, coming in at 5.01 minutes.  It is quite brilliant, with a fairly strong constant beat.  Track 4 is an even weirder and more brilliant Williamson epic, lasting 7.40 minutes, called “Three Is A Green Crown”.  It is less structured than Track 2, and talks of the “second self”, and features the plaintive plea “let not the swan be brought low”.  I have always loved this one to bits.

Sandwiched between these two, however, is a short and relatively conventional song called “The Water Song”, just 2.41 minutes long.  It is a beautiful, subdued, strictly intoned song which is indeed about water.

This forms a serial Williamson trilogy in the middle of Side 2.

The penultimate track on the album is a classic Mike Heron song about children’s nightmares, called “Swift As The Wind”.  It is of medium length, at 4.50 minutes.  The refrains are truly eerie, taking the form of: “There is no blood; the night is all around my child; you must stop imagining all this…”.  Chilling though it is, it is still a great song.

Track 6 on Side 2 ends the LP, and is a most fitting cadence indeed.  It is a Williamson composition called “Nightfall”, and is the shortest track on the record at a mere 2.29 minutes.  It is an ISB lullaby, very dreamy and soporific, and ends the LP just perfectly.

The back cover credits the photos to one Iain Skinner.

I was only able to afford this LP in Oxford, while I was at University, from the trendy shop in Little Clarendon Street, in 1976, when it came on the US “butterfly” label: 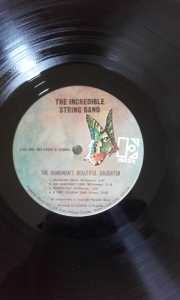