I have only this last fortnight discovered just how schizophrenic this album is; from the outset it seems to have been at the same time a double album and two single albums. More of this in due course, but in the meantime I’ll say a little bit more about the music.

Track 3 on Side 2 is a Heron song called simply “Air”, and lasts 3.12 minutes.  It is the most soothing music I have ever heard, and a piece of immense beauty.  The girls, Rose and Licorice, do a gentle and magical chant as an intro, which continues throughout.  The lyrics are almost spoken rather than sung by Mike, and form a soft counterpoint to the main melody, much in the way of “Sheep May Safely Graze”.  It is a song of pure brilliance and God-given inspiration (no pun intended).  If I were introducing ISB to someone who had never heard them before, this is the track I would play to him or her to convert him or her.  Mike plays guitar and organ, and Robin plays flute.

Side 2 ends with an epic Williamson song called “Ducks On A Pond”, which comes in at a whopping 9.17 minutes.  Robin takes the lead vocal and plays guitar, piano, kazoo [yes really!] and bass drum; Mike plays percussion and harmonica.  The song has nothing to do with ducks or a pond; the title is taken from its opening words. This piece makes a splendid cadence to the “Wee Tam” half.  It does leap and hop among various discrete sections, including towards the end the complete nursery rhyme “Boys and Girls Come Out to Play”.  Shortly before this the song also features the line “Lovely Jesus nailed to a tree”, which would not be out of place in any of the Christian songs I love to sing.  Again this shows the Scottish Sunday School upbringing the two chaps had.  In any event this is a truly magnificent song, one of the very best the band ever did.

On the schizophrenia, for the time being, suffice it to say that I have only recently discovered, to my utter shock and amazement, that I have TWO LPs the labels one Side One of each claim to be Side One of an album called “Wee Tam & The Big Huge”! 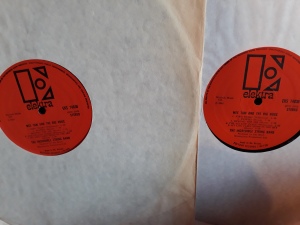