This time we continue Prydwyn Piper’s notes on the penultimate track on the album, “Douglas Traherne Harding”, these notes appearing in the book “An Incredible String Band Compendium” edited by Adrian Whittaker.

“For the ultimate source of “My eye was single”, however, as of much else which goes to make up the substance of our song (including the central concept of the “headless man”), it is necessary to turn to the work of Douglas Harding. 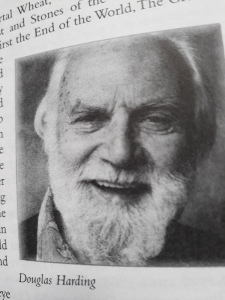 “Douglas Edison Harding was born in 1909 (and last I heard [2003] was still alive), and at first glance would seem a strange individual to be cast in the role of religious guru.  As the blurb to one of his books states: “D.E Harding is no blinkered specialist.  While a partner in a flourishing agricultural practice, he taught comparative religion for Cambridge University.  While a wartime major, he developed a unique means to spiritual enlightenment.  He describes his field as the meeting-place of psychology, physical science, philosophy and religion.  His published works include a whodunnit, a philosophical treatise that took eight years to write, books on religion and the arts of living and dying and articles in the Transactional Analysis Journal, Architectural Review, Middle Way, and the Saturday Evening Post…Ann Bancroft’s 20th Century Mystics and Sages has a chapter on Harding as “the man without a head” – a reputation which the Incredible String Band helped to establish with their Douglas Harding Song (you’d think they could get these things right…).  At the age of eighty he still conducts workshops around the world.  Attendances – and “decapitations” – have ranged from a handful to thousands.” ”

More from these notes next ISB time.