This time we continue with “Alex the Gnome”’s notes in the insert which came with the CD “An Italian Tale”:

“The day after the band performed regularly at the EUR Palazzo dello Sport in Rome, adding new songs to the set list played at Brescia including “Astronomy Domine” to include in the show.  After this brief and somewhat tormented experience Pink Floyd returned to Italy for only a few days in October of the same year to shoot their famous concert in the amphitheatre of Pompei [see above].

“After this last visit, the band wouldn’t return to Italy for a long while; the promoters poor reputation had the management decide to turn their backs on the Italian public.  Only 17 years later, in 1988 and with the release of “A Momentary Lapse of Reason” this embargo ended and Pink Floyd played 5 shows in 3 different cities (Turin, Modena and Rome), the huge success meant that the band would return again in Italy the following year (with the same show) for 8 other shows to 4 other Italian cities, including Verona, where they finally played for 3 nights at the famous Arena where they would have played on August 26th 1972 during a festival, but unfortunately this was cancelled due to the alleged hostility from the Italian press.”

Next PF time we conclude Alex the Gnome’s notes.  Meanwhile, a pic from the CD packaging: 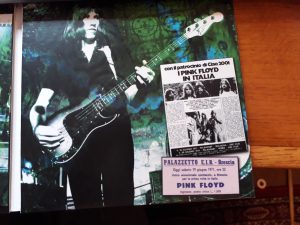