“Animals” is the third and final album in the band’s classic trilogy, which marked for ever the zenith of their recorded output; and it is a very good LP indeed.  In my humble view, it is actually the best of the three.  It really is pure, unmitigated, absolute ecstatic joy to listen to from beginning to end.

There are only 5 tracks on the LP, 2 on Side 1 and 3 on Side 2.  As far as I can tell, all of the actual singing is done solo by Roger Waters, virtually all of it in his “gruff rock” style.  However, the best bits are without doubt the instrumental breaks that punctuate the singing, all but one of which feature Dave Gilmour’s distinctive guitar.  No doubt other members of the band would have done some of the non-verbal backing vocals.

This is the front cover of the splendid outer gatefold sleeve; and yes, that really is an inflatable pig being flown over Battersea Power Station as it was in 1977, the year of the album’s release: 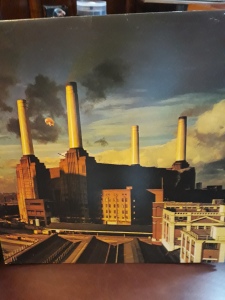